Poland’s sixth largest city could well be the perfect city for weekend breaks. With a beautiful old town and whites sandy beaches nearby, it was home to some of the most significant events in modern history and as it’s one of the hosts of EURO 2012, the whole place has received a lick of paint making now a great time to visit.

Gdansk was bombed to bits in WWII, but you’d never guess. The old town is therefore not that old. It has been rebuilt to showpiece a collection of gabled guild-houses from the days when Gdansk was a major European trading port. The main drag, Dluga, is a wide pedestrianized street with busy bars and restaurants and makes up part of the Royal Way. This was where the King of Poland would come to collect taxes from the wealthy locals, entering the old town at the Upland Gate, walking down Dluga until he reached the River Motlawa.

Just off Dluga is St Mary’s – Poland’s largest church. For a few zlotys you can climb the 403 steps to the top of the church’s tower for 360° views of the city and the surrounding area. There’s only room for about ten people at the viewing platform. I’ve climbed a few of these sort of towers on my travels, but this is the first one I’ve known to have a seat at the top for the weary to sit down (for a 2 zloty fee – if you sit, a bouncer will ask you to pay!)

The view from the top of St. Mary's

The River Motlawa dissects central Gdansk – there is a bustling waterfront on the Old Town side with bars and restaurants either side of what looks like a huge black chimney overhanging the pavement, but was once the biggest crane in the world. From here, you can take a sightseeing cruise on a pirate ship along the Motlawa to the point where it meets the Baltic Sea. Your journey will take you past the cranes symbolic of the city’s shipbuilding heritage, before passing the lighthouse where the Germans fired the first shots of WWII in 1939 – look closely and you’ll see the bullet holes. There’s a bar on board the ship, so kick back and relax with a cold beer before venturing out for a night on the tiles. 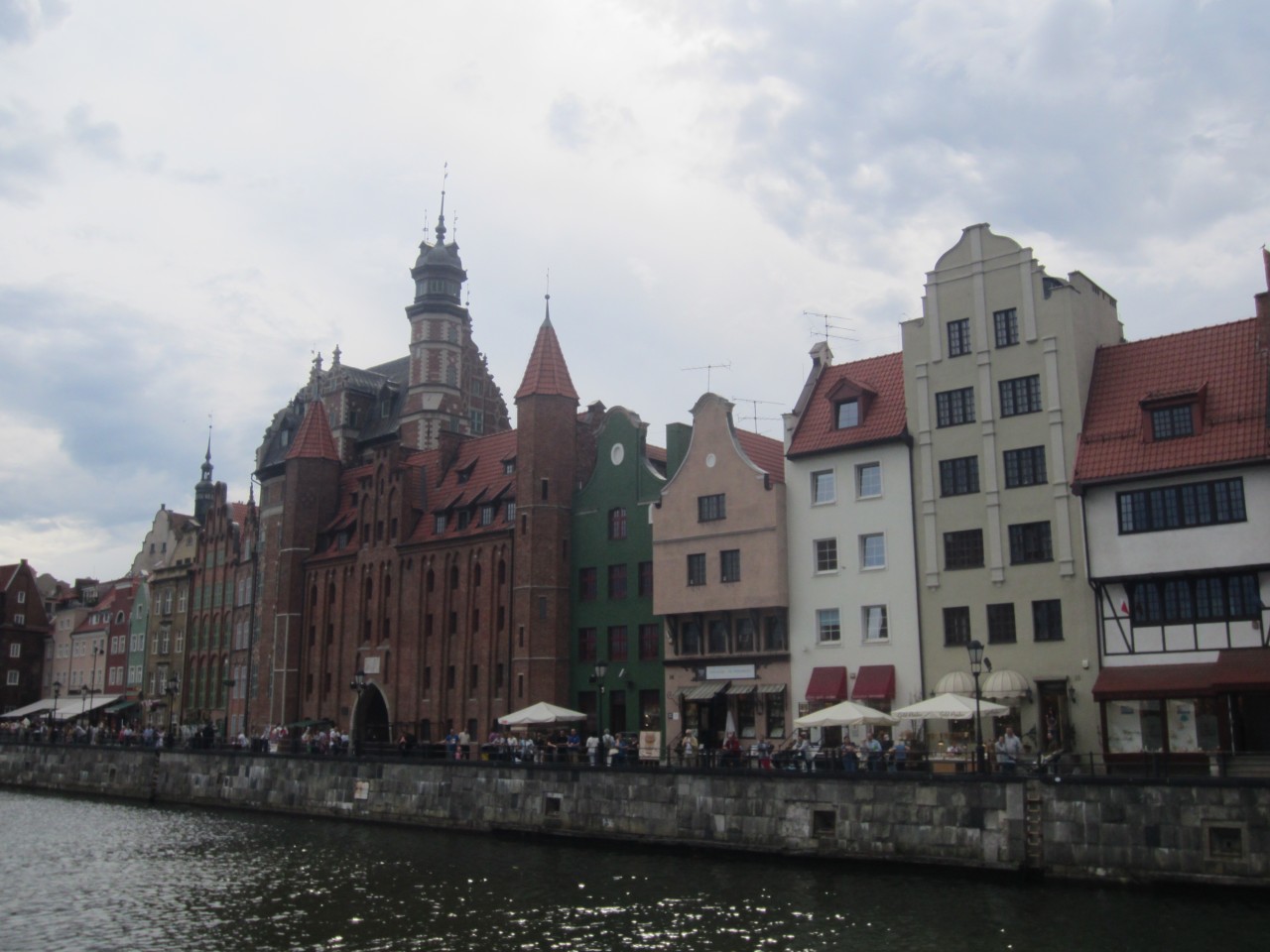 Stop off for a beer at a bar along the waterfront

In the early 80’s Gdansk made the front pages and was on TV news bulletins all over Europe. All I remember was a fat man with a funny moustache, but that man (Lech Walesa) brought communism to its knees when he created the Solidarity trade union at the Lenin Shipyards, where he worked as an electrician. Walking through Gdansk towards the shipyards, you pass the Roads To Freedom museum with a piece of the Berlin Wall at the entrance. At the gates of the shipyards there is an immense statue – Monument to the Fallen Shipyard Workers – comemorating the shipyard workers killed protesting against communism. 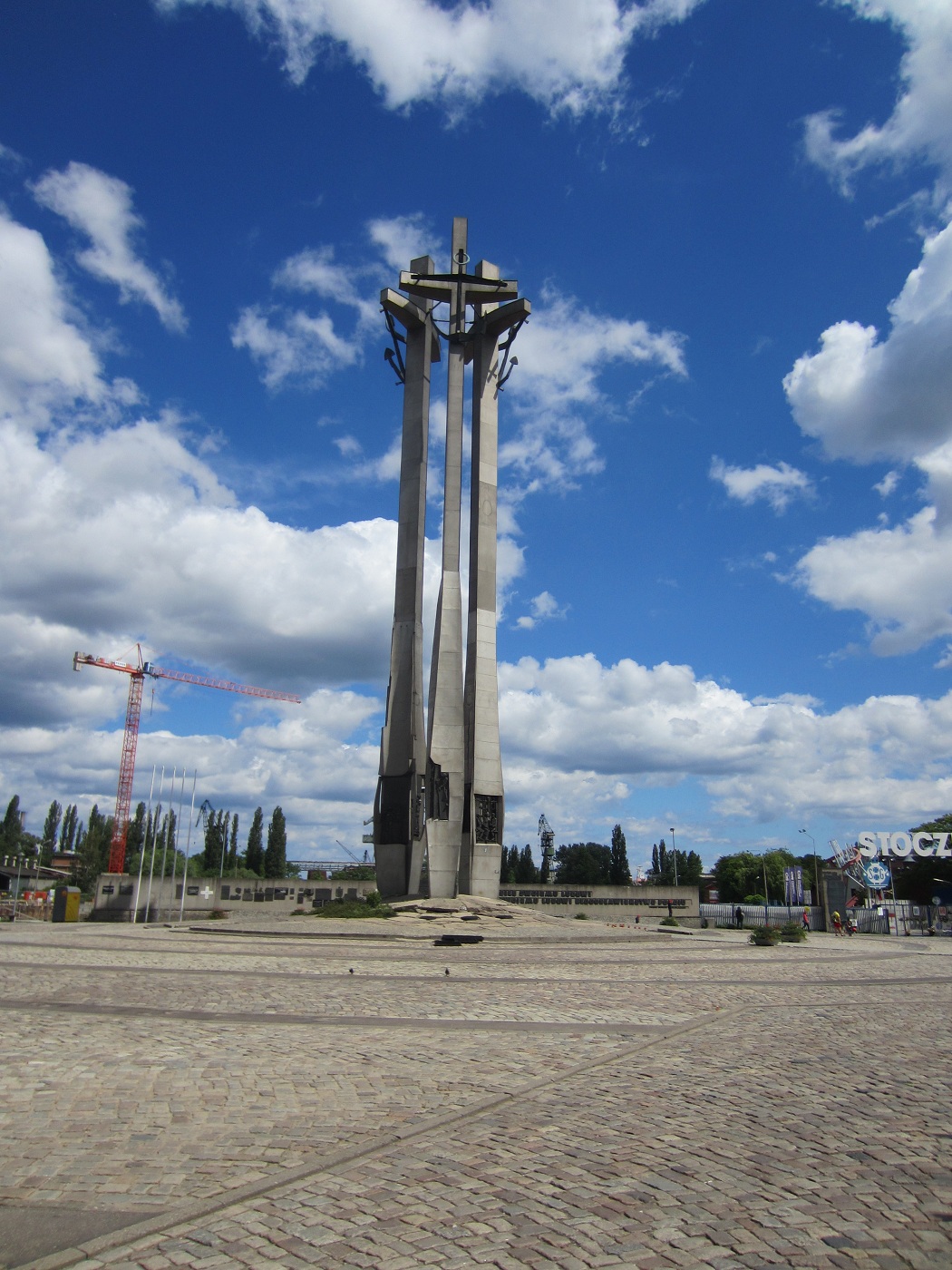 Monument to the Fallen Shipyard Workers

After all that culture, it’s beach time. Gdansk is part of what’s known as the Tri-City conurbation along with the town of Gydnia and the seaside resort of Sopot. All three are interconnected by a cheap and reliable commuter train network. The train from Gdansk gets to Sopot in around 20 minutes. It’s a pretty resort town with plenty of bars and restaurants lining both sides of the pedestrianized main street, which leads downhill to the sea.

You may not expect the beaches to be up to scratch along the Baltic coast, but you’d be so wrong – Sopot beach has white sands to rival those of the Bahamas. Take a stroll along the shoreline in a westerly direction – it goes on forever – until you find a piece of beach all to yourself. When it’s time to get back to the station, rather than retracing your steps, walk through the pine forest that backs on to the beach. Before leaving Sopot, take a walk on the town’s claim to fame – the longest wooden pier in Europe.

The Baltic or the Bahamas?

A Bit of Culture top tips:

Hotel Artus (Piwna 36/39; www.hotelartusgdansk.com) may only be a three star hotel but it looks and feels much posher than that. Sandwiched between Dluga and St Mary’s Church, it couldn’t be better located. And the best bit – the hotel is above one of Gdansk’s best bars, Café Mon Balzac (www.monbalzac.pl) where residents have the excellent buffet breakfast. Doubles with breakfast from £80.

There will come a point when you’ve had enough of the gassy local lagers Zwiec and Tyskie. This is where Brovarnia (Szafornia 9; www.brovarnia.pl) comes in. It brews and sells its own dark and light beers in 300ml, 500ml or 1000ml glasses. The pub’s terrace overlooking the River Motlawa is a good little sun-trap – I challenge anyone to have just the one drink here.

You can’t leave Gdansk without trying the local firewater, Goldwasser. It’s a 40% white spirit with flakes of real gold in, and tastes a bit like Aftershock. Apparently it’s got medicinal qualities – a good excuse to neck a couple of shots before bedtime.

Mr & Mrs Culture on the Goldwasser