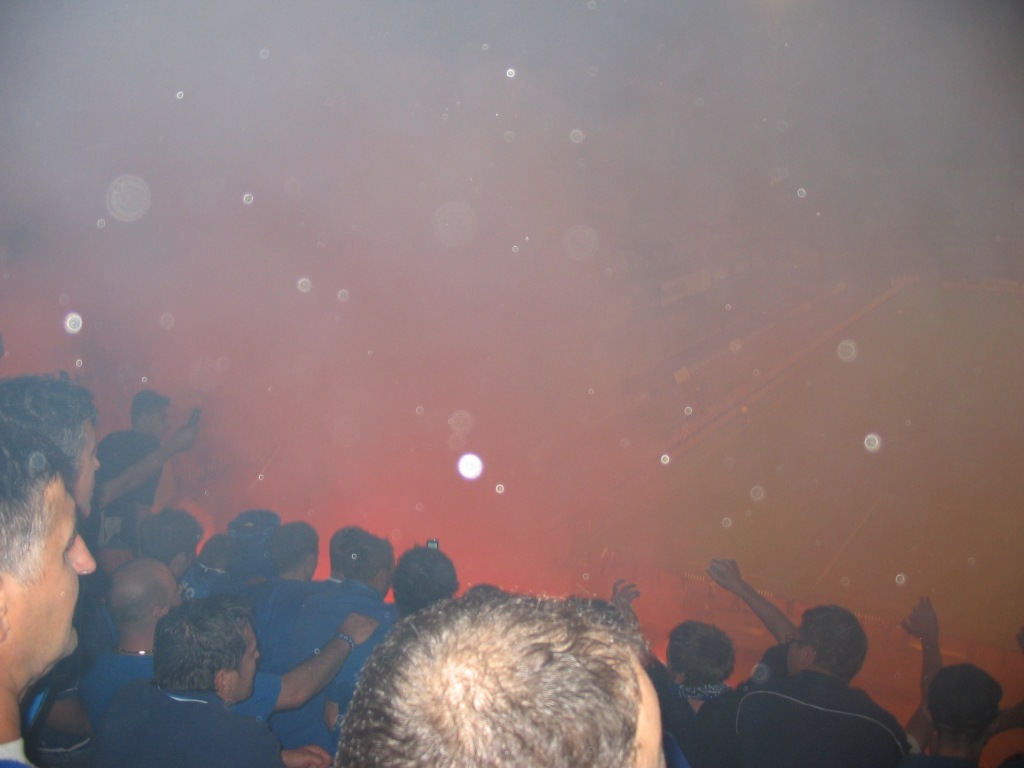 In days gone by, I would go on my annual lads holiday with work pals every September for some late summer sun, strong beer and culture. In 2006, we ventured to Zagreb and as luck would have it our trip coincided with Dinamo Zagreb’s UEFA Cup tie with French club Auxerre.

Getting to Dinamo’s ground, the Maksimir Stadion – also the country’s national stadium – proved to be a task in itself. A pair of locals took pity on us when we boarded what was obviously the wrong tram, and laughed when we said we were on the way to the match. They took us off the tram, waited with us for the right one to arrive, and then sat with us for a fifteen minute ride to somewhere that was completely the opposite side of town they were heading. I’m not sure if you’d get a similar escort on the way to the New Den.

Once near the stadium it was clear that the game was going to be a sell-out, and as we didn’t have tickets we started to panic. We had been told to avoid the North Stand like the plague, as this was where Dinamo’s infamous hooligan element, the Bad Blue Boys (BBB for short), stood.

So imagine our distress when armed riot police told us the East, South and West stands were all sold-out – it was either risk death with the BBB or admit defeat and head back to the city centre. We did the sensible thing and forked out around £20 each to stand with a bunch of absolute nutters! 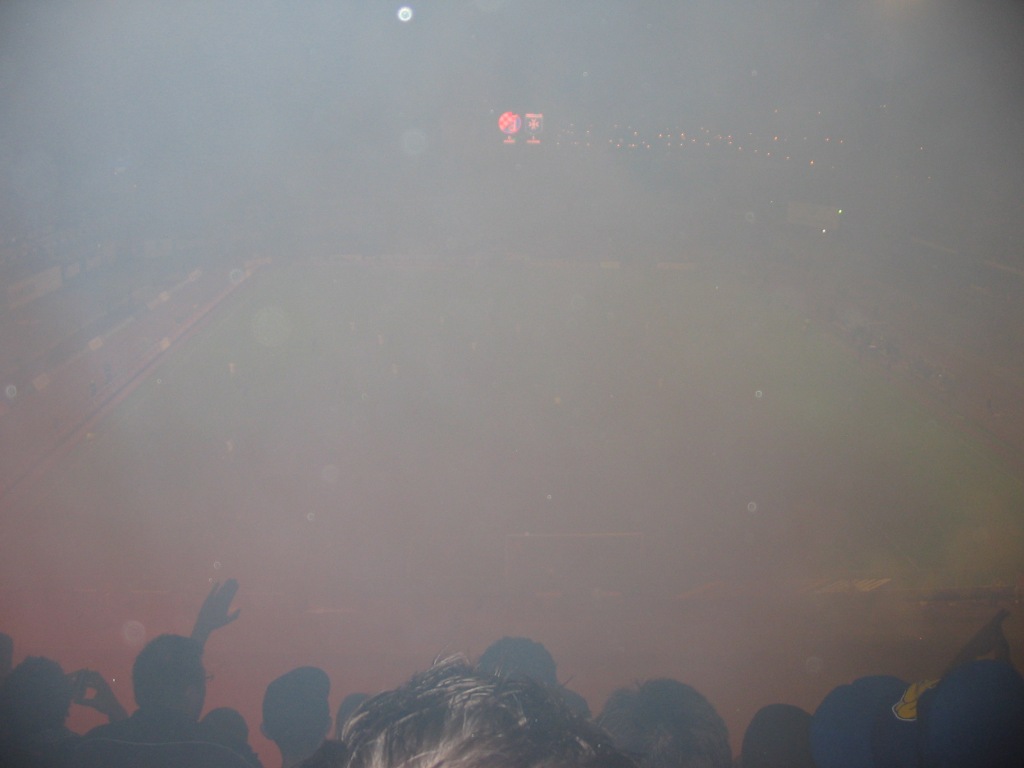 In a standing area, with flares erupting every five minutes and with the height of the average Dinamo fan being 6 foot 9, we could see precious little of the on-pitch action, although that is not really what the BBB go to games for. 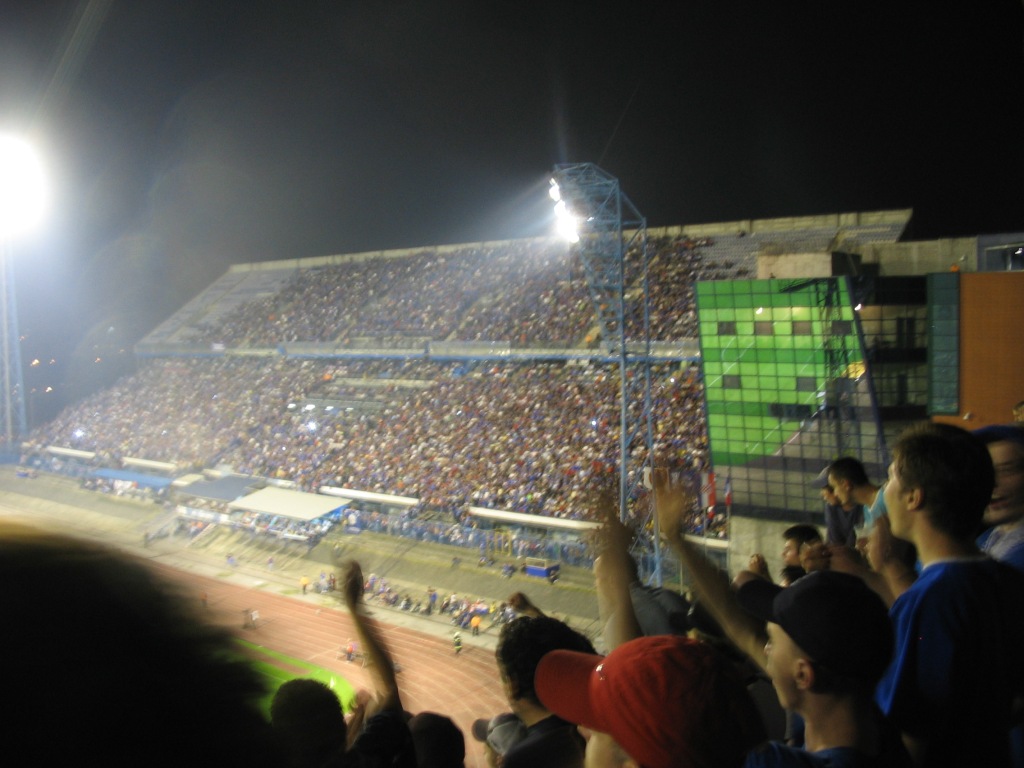 From what little of the game I did see, Dinamo were not very good at all and were well beaten by a skillful, and much fitter, counter-attacking Auxerre side. One player that stood out for the home team was their Brazilian-Croat centre forward. I like to think Arsene Wenger was at the game too, as at the end of the season Eduardo became an Arsenal player. 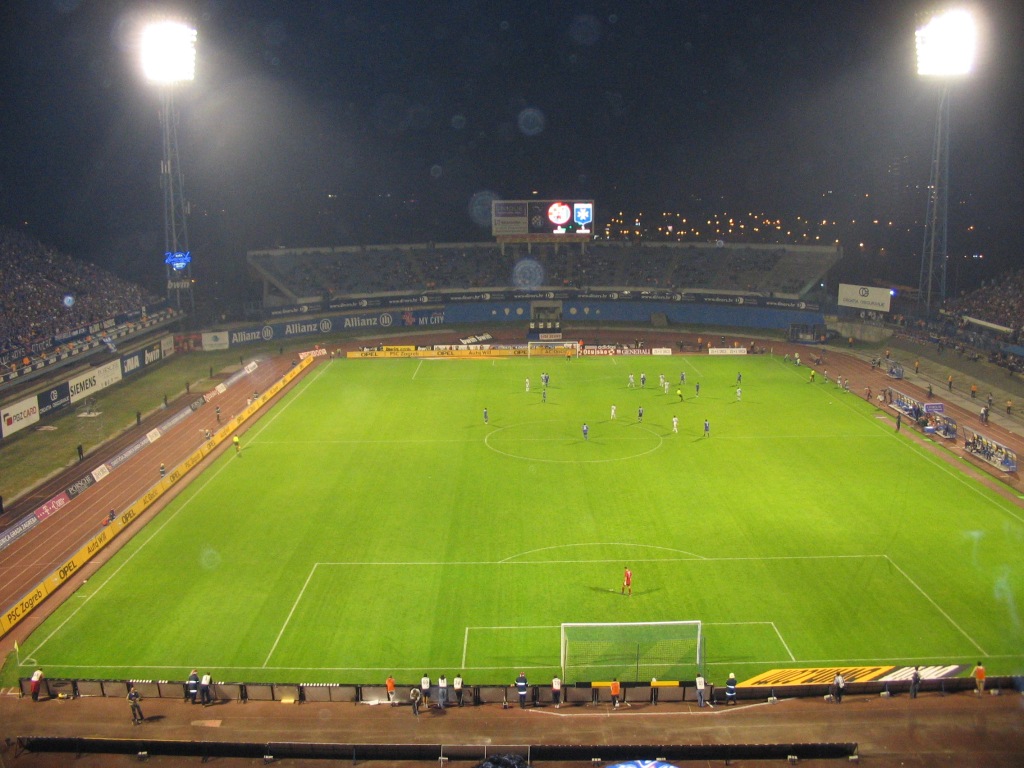 As the clock ticked towards the 90th minute and it became clear Dinamo were going to be knocked out, the BBB became more vociferous with their abuse hurled at the dozen or so Auxerre fans in the corner – I didn’t fancy their chances of making it back to the airport in one piece. We did that thing I always despise in football, and left five minutes early to beat the queue for the tram.

Teams from these parts have long been proud of their ultra culture, and are big fans of banners, flares, choreography, chanting and fighting. Torcida, the ultra group of Dinamo’s big domestic rivals, Hajduk Split, claim to be the first organised fan group in Europe, and can be traced back to the 1950s.

In 1990 when tensions were at boiling point between Croatians and Serbs, Dinamo played fierce rivals Red Star Belgrade at the Maksimir – at the time both teams played in the Yugoslav league. Football violence has always been a good barometer of social unrest, so it was no surprise when a mass riot broke out on the pitch between the Bad Blue Boys and their Red Star ultra counterparts, Delije.

If I’d have seen this youtube video clip of events that day before we went, I doubt if I would have dared set foot in the ground:

The Dinamo captain, Zvonimir Boban, was granted national hero status that day when he did a Cantona-style karate kick on a policeman in the chaos that ensued. The kick is at 01:16 in the video above. Dinamo fans regard this as the first strike in the war that started across the former Yugoslavia the following year!

Boban went on to become a Serie A legend for Milan and was part of the Croatia team that finished third in the 1998 World Cup. Nowadays he owns a restaurant-bar in Zagreb city centre called Boban, which is well worth stopping at for a post-match beer before moving on to the bars in pretty pastel-coloured Tkalčićeva in pedestrianised Gornji Grad (Upper Town).

Anyone want to see a pretty cool video clip of some flare pyrotechnics?