England’s second city has transformed itself over the past 20 years from being an ugly urban jungle famed for its dodgy ’60s buildings to a modern metropolis with some of the finest new structures in Europe. Read on to find out about the pick of Brum’s architecture.

The newest building on Birmingham’s skyline, in Centenary Square, is either the ugliest building in the world or a fine piece of envelope-pushing modern architecture, depending on your taste. It’s also the biggest public library in Europe with over 800,000 books and 200 computers.

From a distance it looks like a giant wasp-coloured Liquorice Allsort wrapped in barbed wire. Up close you can see the metalwork on the library’s exterior which the architects, Mecanoo, say pays homeage to the city’s industrial heritage.

There are ten floors of joy for book-lovers, and unusually for a library it has rooms for gigs and talks. There’s an in-house cafe, and outdoor terraces (called “secret gardens“) on the 3rd and 7th floors. The 9th floor has an indoor “Skyline Viewpoint” with sofa seats from which to take in Brum’s best view. It’s often booked up for private events, so check before waiting for the lift (or tackling the stairs like I did).

After costing £188m, it was opened to a great fanfare in September 2013 by Malala Yousafzai – the Pakistani girl shot by the Taliban and now an honorary Brummie.

The Council has set a target of 3 million visitors in the library’s first year, and must be well on the way to meeting this already. Definitely worth a look (inside and out) if you’re in town.

Anyone can join, regardless of where you live. Click here to join online.

This cylindrical tower, a grade II listed building, was constructed in the 1960s but was given a makeover in 2008. Once used primarily as an office block, it now consists of the ubiquitous ‘serviced apartments’, but rooms and penthouse suites on the top floors can be rented out by the night through Staying Cool. I’ve never stayed there, but the panoramic views must be pretty amazing.

There used to be a pub on the ground floor of the Rotunda. The Mulberry Bush was one of the two boozers targetted by the IRA in the infamous 1974 Birmingham Pub Bombings. The other, The Tavern in the Town, is now an all-you-can-eat-for-a-fiver buffet restaurant on New Street.

It’s not just the new that Birmingham can be proud of. Linking the shops of New Street and the Bullring to the bars and restaurants of Brindley Place, the pedestrianised Victoria Square has to be one of the finest squares in the country (although it’s not in the same league as some of the great Piazzas, Plazas and Places of mainland Europe).

It’s flanked by the Council House, Birmingham Museum and Gallery (BMAG) and the Town Hall, and has statues of Queen Victoria, “Iron Man” by Anthony Gormley (of Angel of the North fame) and a water feature. What it’s crying out for are bars with outdoor seating on the square.

I’m not sure if it’s because of the UK’s crazy licensing laws, or if no-one else agrees with me, but until it happens you could always do what I do on sunny lunchtimes – get a sandwich from Greggs just down the road, sit on the steps by the fountain and people-watch. 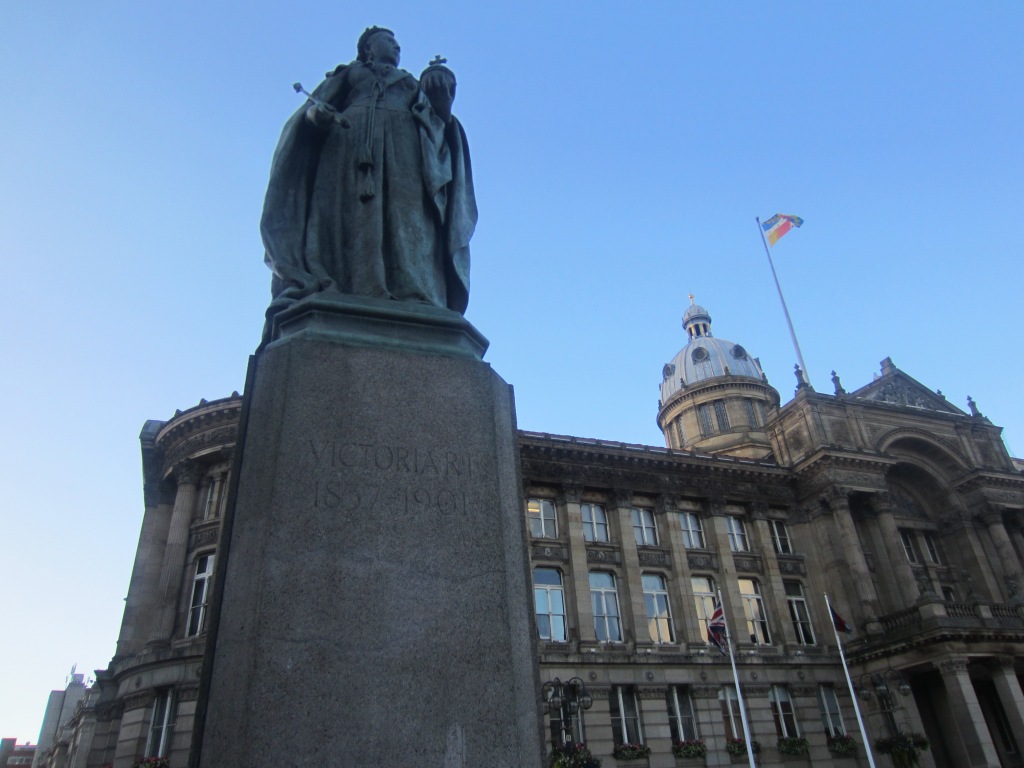 September 2013 marked the 10th anniversary of Birmingham’s premier indoor shopping centre. It’s pretty unremarkable on the inside, with all the usual high street names and very few independent stores. But from the outside it’s a bit of a stunner – the exterior of Selfridges is covered with 15,000 silver discs, making the building look like a dragon, with a covered footbridge to the car park being its tail.

This 130m tall hotel and residential building is the tallest in the city. It’s not as tall as the BT Tower, but that is classed as a tower rather than a building.

The lower floors are taken up by a branch of the posh Radisson Blu hotel and its restaurant, with the upper floors being more serviced apartments.

You can see the blue mirrored glass windows from miles away, especially on take-off from Birmingham Airport, which isn’t always a good thing. My office is in the building next to it, so I’m reminded of work whenever I see 10 Holloway Circus.

Birmingham is such a dynamic city, there are loads of cranes on the skyline at the moment – a good indicator that the economy can’t be doing too badly, and a sign that more iconic buildings are on the way.

New Street station is undergoing a massive regeneration which will see a new shopping centre, ‘Grand Central Birmingham‘, with a John Lewis as its showpiece. So far it’s looking good – be sure to check back here in autumn 2014 when it’s finally completed.