The day-trippers’ guide to Bruges 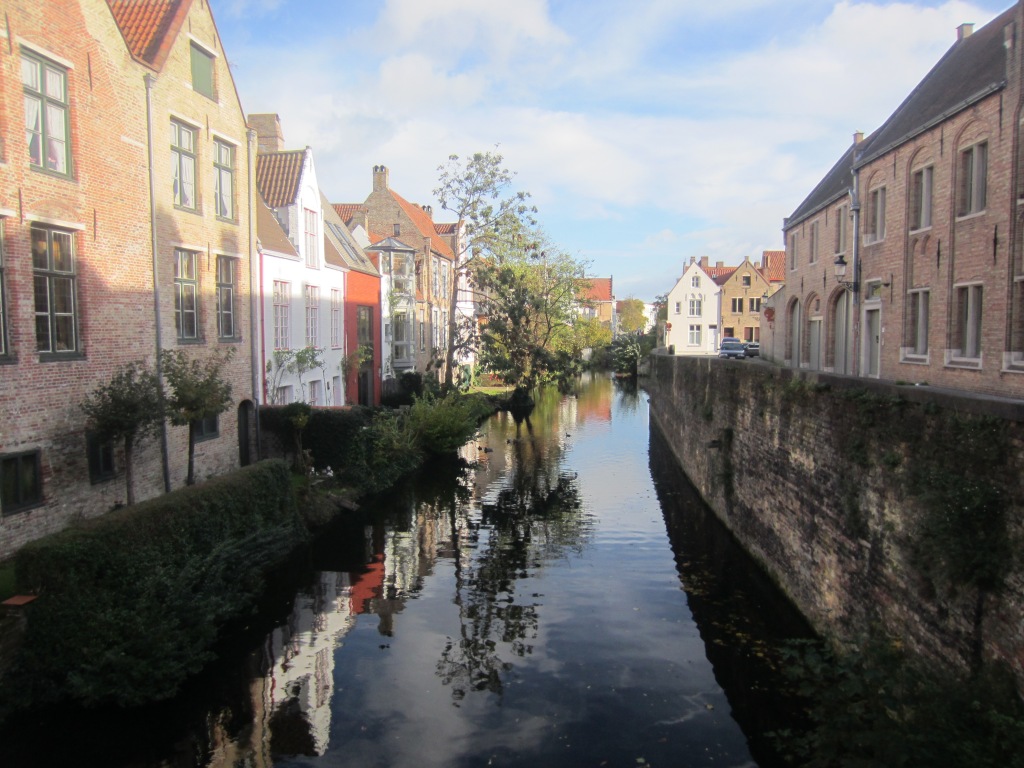 If you like your culture, sightseeing, beer and chocolate, Bruges is the place to go. And not only is it heartbreakingly beautiful, it’s the perfect size for day-trips.

As Bruges doesn’t have a major airport, you’re likely to start your day at Stationsplein, home to the bus and train stations, and the drop-off point for the P&O ferry from Hull to Zeebrugge.

The centre of Bruges is a fifteen minute walk from here – just cross the busy dual-carriageway and turn left until you see the medieval spires. Once you’re in the oval-shaped historical centre, you may not see another car until you return to the station.

First stop has to be the belfry, the 83-metre tall gothic bell-tower in the main square, Markt. Get here as close to opening time (9.30am) as you can to avoid queueing. For €8 you can climb the 366 lung-busting steps to the top for pretty special panoramic views. 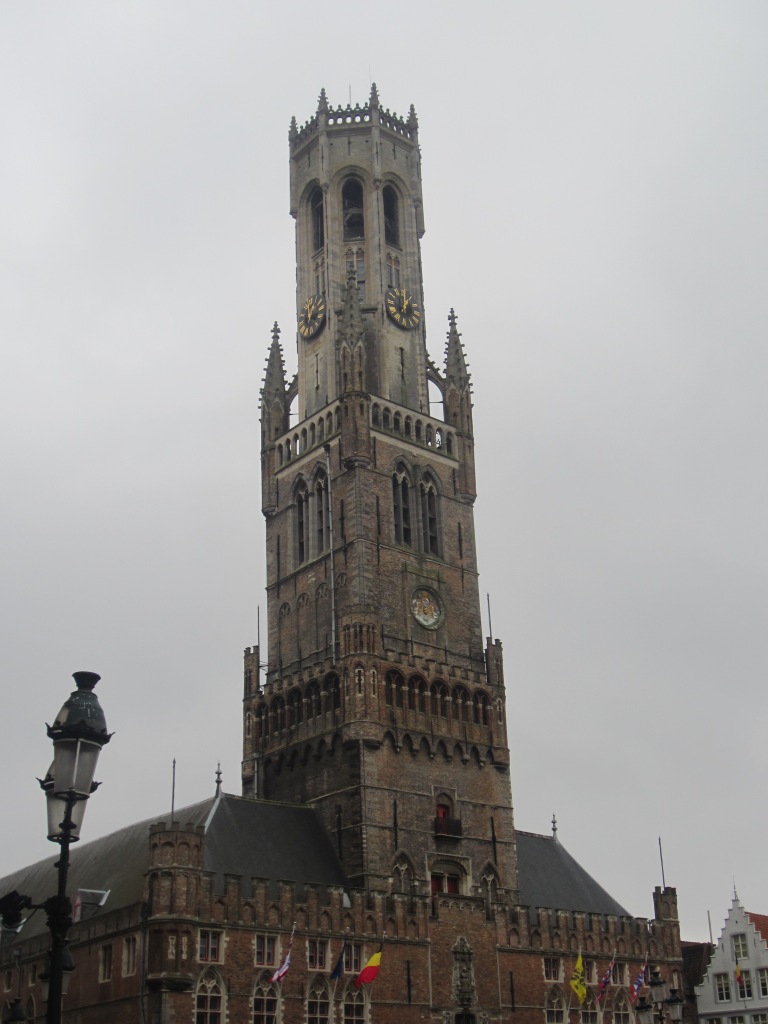 After burning all that energy off, it’ll be time to take on some calories, and Bruges is heavy on cakeshops and tearooms. Try the flavoured croissants served with jars of chocolate spread at the cosy Le Pain Quotidien (21 Philipstockstraat; website), or if that’s full the cakes at Patisserie Van Mullem (56 Vlamingstraat; website) should fill you up for a couple of hours.

Probably the number one thing to do in town is to go on a cruise around the city’s canals. Boats leave constantly from the bridge on Wollestraat and a guided half-hour tour will set you back €7.

Back on dry land, don’t forget to take a selfie at Bruges’ most photogenic spot, Rozenhoedkaai, with the canal and the belfry behind you. 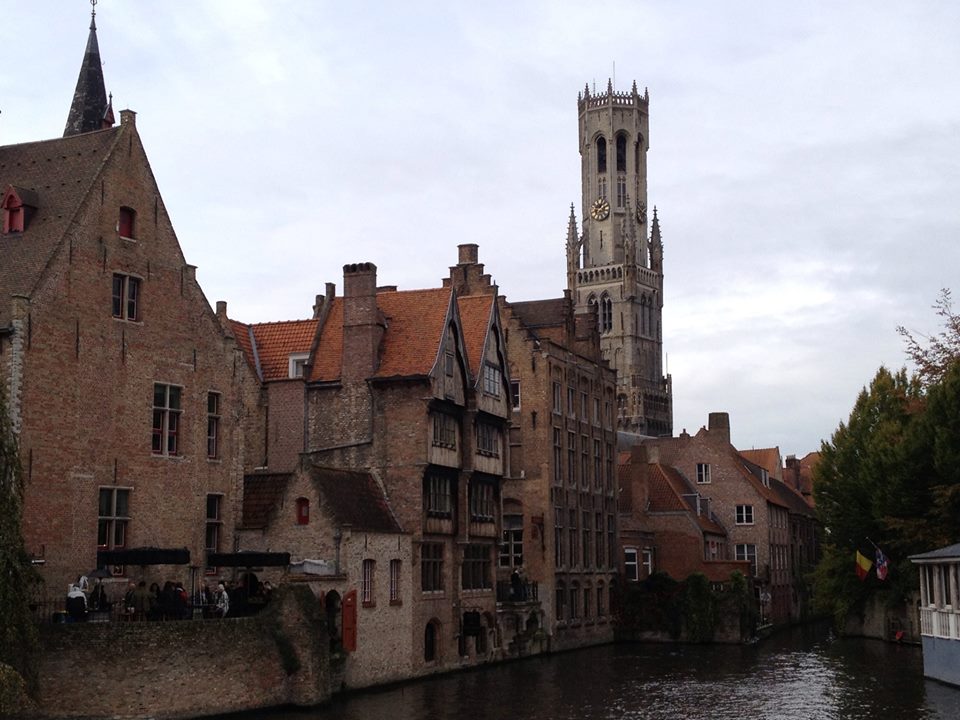 A cheesier way to see Bruges is to take a horse and carriage ride on the cobbled streets. If you fancy feeling like an extra from the BBC drama Ripper Street, carriages pick up at Markt and cost €39 for a half-hour ride, including a ten minute stop to feed the horse. Horse and carriage rides have recently been banned in New York’s Central Park and I’m not sure how long they’ll still be around for here, but as a one-off it’s a fun way to see Bruges – just don’t tell any animal rights activists if you decide to take a trip. 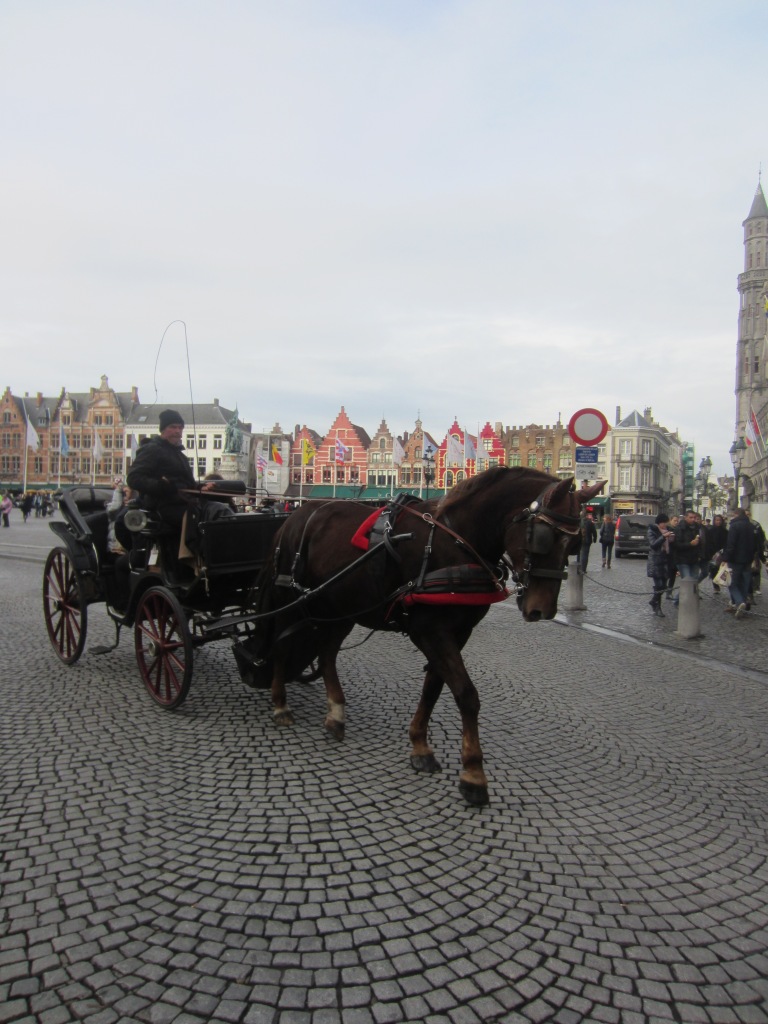 Wandering around without a map is a good way to get away from the crowds, and as you will be able to see the belfry from almost anywhere, you can’t get lost. When you’ve had your fill of the backstreets and canals, head back to Markt, one of the finest squares in Europe.

To see it from the second best vantage point (the first is obviously from the top of the belfry), have a beer at Duvelorium Grand Beer Café – the first floor bar above the Historium Brugge museum in the corner of Markt. This is the official bar of the Duvel Moortgat brewery, but sells other beers if you don’t like Duvel. The bar has a balcony with patio heaters so you can sit outside and watch the comings and goings in the square, and admire the wall-to-wall gothic architecture.

Bruges has a second city-centre square, the marginally less-impressive Burg, connected to Markt by the busy Briedelstraat. Here you will find the Basilica of the Holy Blood, a chapel containing a phial of blood said to be that of Christ. Whether it is or not, for €8 you’ll be able to judge for yourself.

So far, you’ll have had plenty of culture, sightseeing and beer, but what about all that chocolate I promised you? It’s time to head to The Old Chocolate House (1c Mariastraat; website). 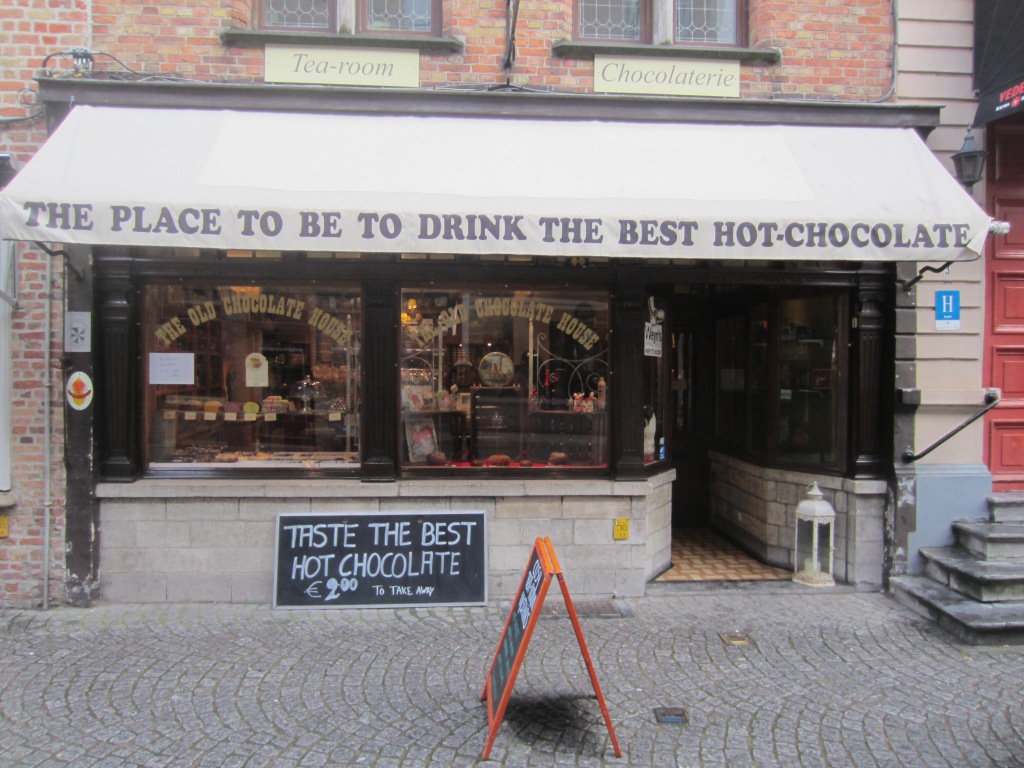 Upstairs, the café serves the best hot chocolate I’ve had in a long time. You get a huge mug of hot milk, a whisk and a bowl full of chocolates and marshmallows so you can make your own drink. I think I was the only person to realise that the bowl of chocolates was actually made of chocolate itself, so I ate half of it and dumped the other half in the mug of milk, much to the horror of my wife. 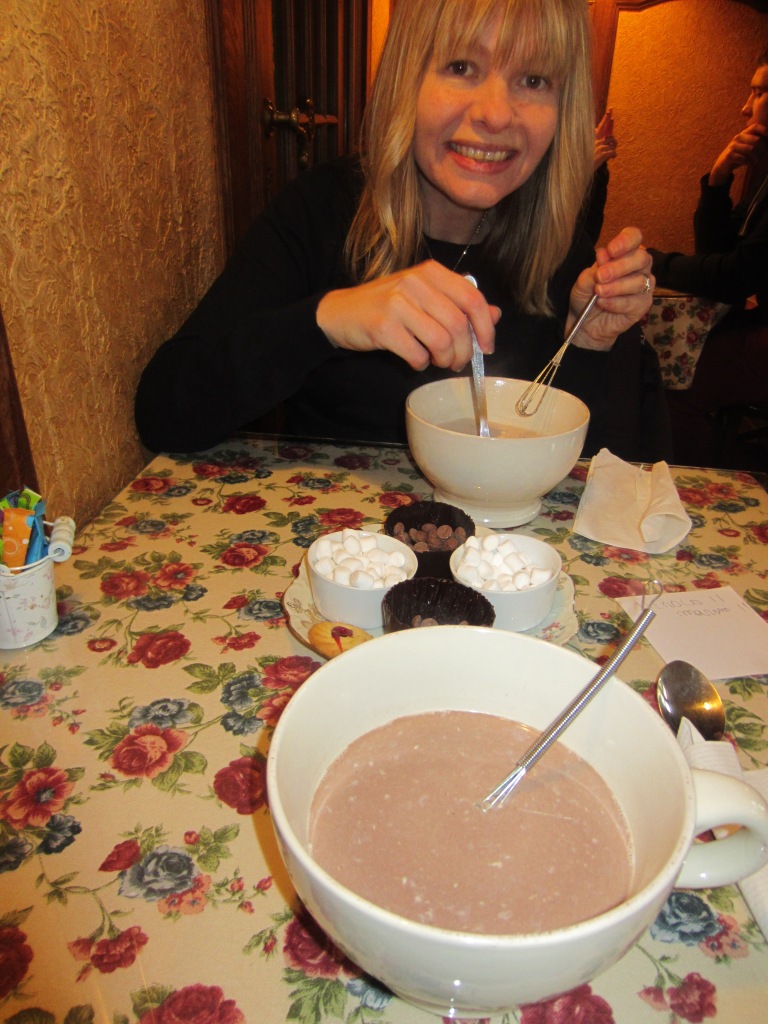 Rather cunningly, you must pay for your drinks downstairs in the chocolate shop where it is a bit of a challenge not to buy a box or two of individual chocolates. The box we bought was far better and much cheaper than boxes we also bought from the two established Belgian chocolatiers Godiva and Leonidas. 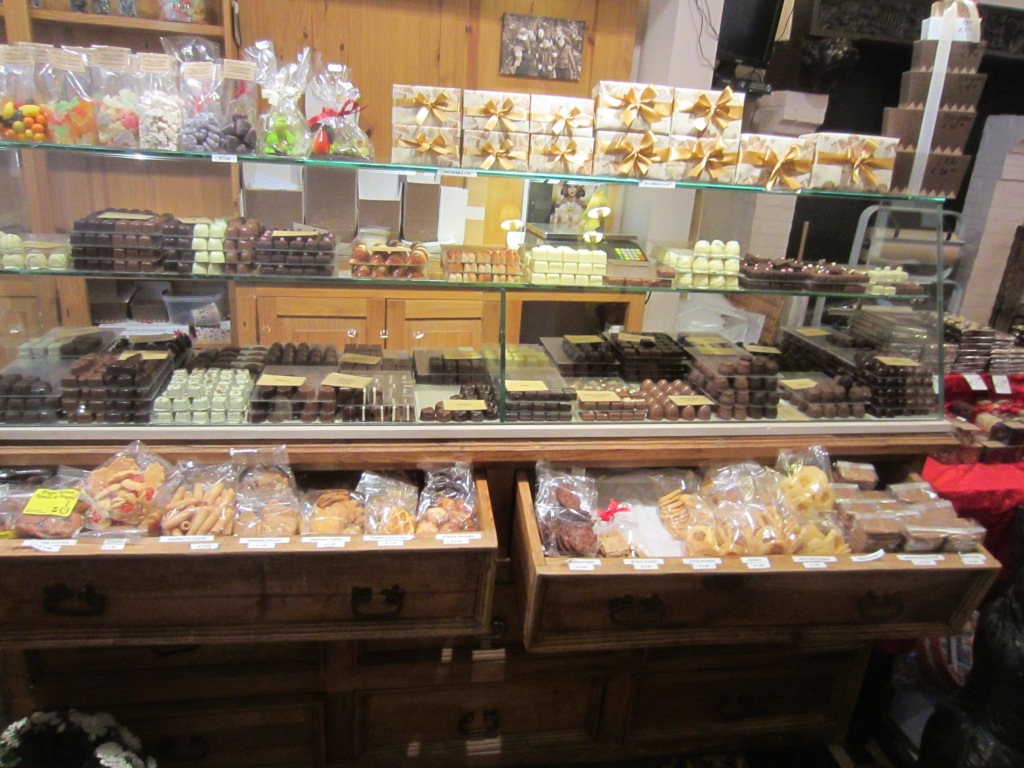 There’s not long to go now until you’ll need to return to the station, but there’s definitely time for one last beer. ‘t Brugs Beertje (Kemelstraat 5, website) only opens at 4pm and is on the way back to Stationsplein – it’s also one of the homeliest bars you will ever visit, and you might not want to leave. It has a handful of beers on draught and hundreds more by the bottle. If it’s cold and wet outside, there’s no better place to enjoy a warming Belgian beer.

You can get back to the station in fifteen minutes from here if you’re quick, but give yourself a bit longer and stop off at Chez Vincent (Sint-Salvatorskerkhof 1; website) on the way for a cone of Belgian fries (with or without mayonnaise) to put the finishing touches on the perfect day out.