Top six things to do in Munich

Tell anyone you’re going to Munich, and the first thing they’ll say is “are you going for Oktoberfest?” But there’s so much more to Germany’s third largest city than the world’s biggest beer festival. Follow these tips – inside or outside of the festival period – and you can’t go far wrong in this Bavarian beauty.

Munich’s attractive Altstadt (old town) centres around this busy square which has its own U-Bahn and S-Bahn stations. Sit down at one of the cafés edging Marienplatz with Kaffee und Kuchen, and marvel at the gorgeous buildings all around. The square is dominated by the massive Neues Rathaus (new town hall) – see top photo. A lift takes you to the top of its tower, somewhere I’d loved to have gone, but our visit coincided with a public holiday, and the queues put me off. 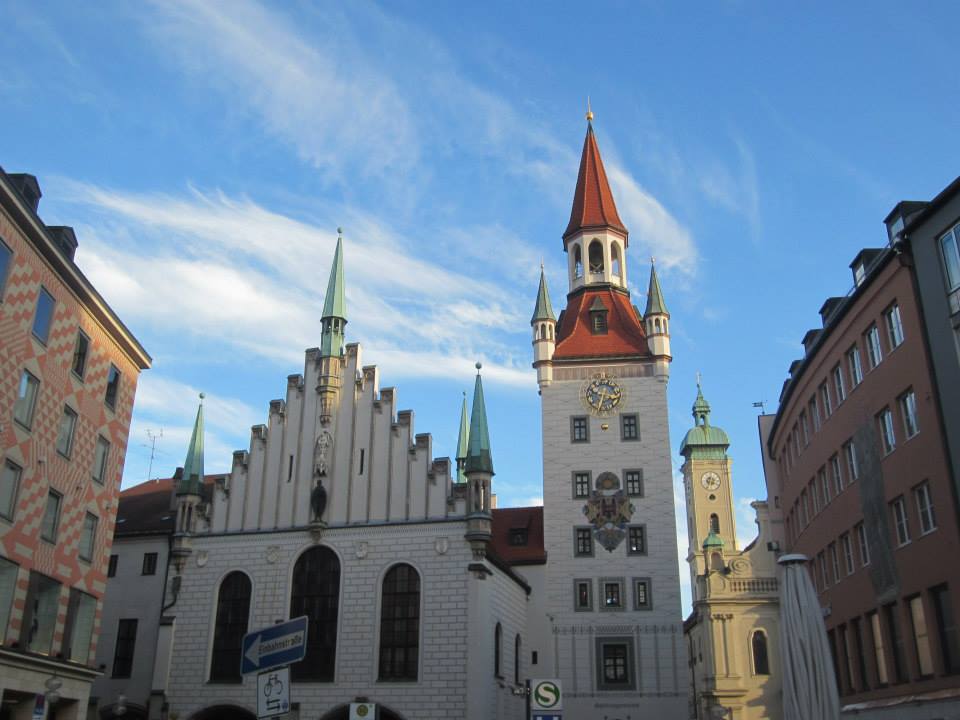 The Altes Rathaus (old town hall), above, was my favourite building in Munich. One thing you won’t need around here is a watch – we counted seven clock-faces from our seat at Cafe Woerner’s on the Weinstrasse corner of Marienplatz, including those on Munich’s oldest church Peterskirche, which chimed every thirty minutes.

I know I’m going to like a city where one of the must-see attractions is a pub. After spending a few hours around Marienplatz, we made our way to Hofbräuhaus (www.hofbraeuhaus.de; Am Platzl 9), a huge beer hall/tourist trap. The place was heaving and there was a constant throng of tourists coming in and filming the mosaiced ceiling and the brass band with their iPad cameras – there is even a souvenir kiosk in the middle of the pub. 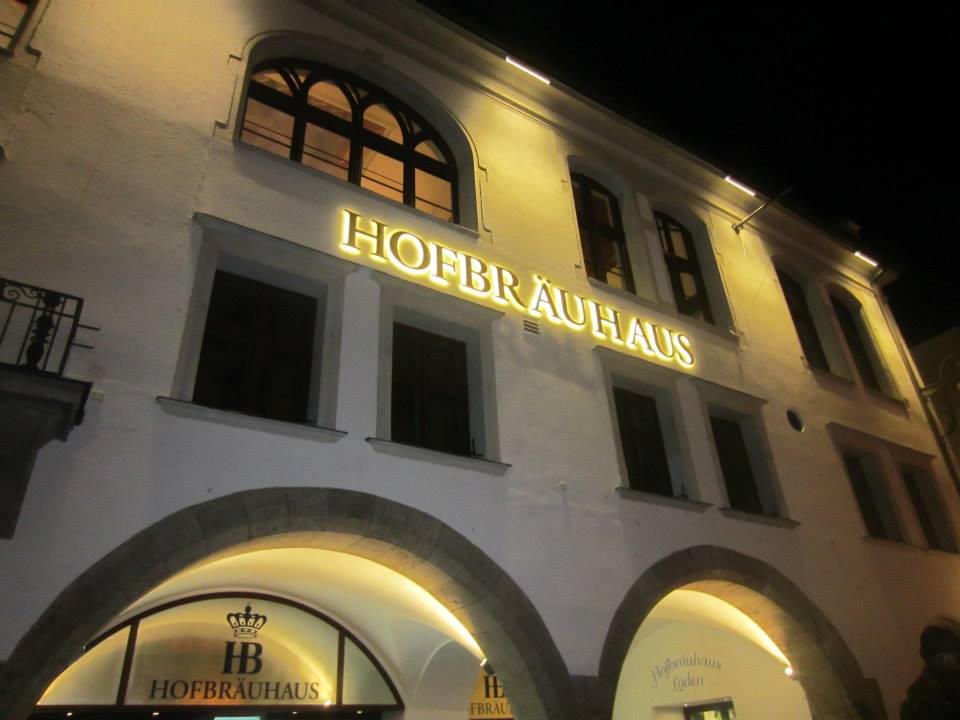 We sat down at the only remaining seats we could find on a communal table next to a group of local gents in traditional Bavarian dress. They told us they come here every Friday, and always sit at the same table and wear the same outfits. As we swigged from steins of delicious Hofbräu beer, our new friends told us a bit about the city and the pub itself.

I asked one of them, Stefan, why he was drinking from a ceramic stein, rather than a glass one like everyone else. He told me there was a waiting list to become a Hofbräuhaus member, and once you become a member you can apply for a locker – he is now the proud owner of a locker in which he stores his own stein. 1 litre steins (almost 2 pints) of original, dark or wheat beer cost €8. They stop selling half-litres (€4) at 6pm, presumably to help the busy waiters out a little. There are cheaper, less touristy and less crowded beer halls in Munich, but you can’t leave town without a visit to Hofbräuhaus.

Before we left, I asked Stefan if there was one thing in Munich we must do, what would it be. This is why the next morning we found ourselves on the way to…

One of the biggest parks you’ll ever see, Englischer Garten stretches from the city-centre to the northern suburbs. We couldn’t understand why people were heading to the park with surfboards – Bavaria is landlocked and hundreds of miles from the coast. But as we entered the park we could see surfers queue to ride a single wave created by a fast-flowing stream.

The stream leads to waterfalls and lakes, but we were looking for the biergarten in the middle of the park known as the Chinese Tower. We sat on one of the benches and enjoyed another Hofbräu in the Autumn sunshine. Brass bands play from inside the pagoda in Summer, but we entertained ourselves with a spot of people-watching.

One of the best views of the spires of Munich’s Altstadt is from the Monopteros tower at one of the park’s highest points. The park is so big (bigger than New York’s Central Park), we could have spent the whole weekend there, but hunger was calling and it was time for some meaty food.

I’d read a few people say the beer halls were great for drinking, but less so for eating. After seeing the pork knuckle at Hofbräuhaus, I was seriously beginning to regret listening to this advice. 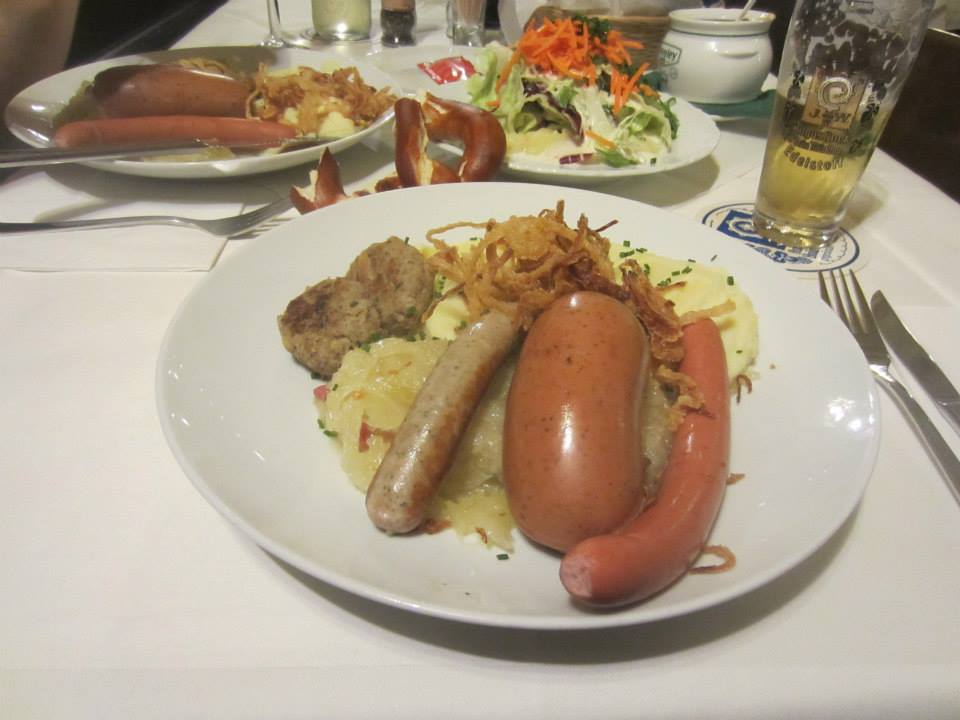 So off we headed to another of the city’s famous old beer halls, Augustiner Bräu (www.augustiner-restaurant.de; Neuhauser Strasse 27). The sausage platter with sauerkraut, washed down with Augustiner beer, was the culinary highlight of our trip to Munich.

The Olympiapark complex was constructed when Munich held the 1972 Olympic Games, and is another green part of the city with a pretty lake next to the various Olympic venues. As it was a sunny day, we decided to walk the 6km there from the city-centre, and get the U-Bahn back. Around the lake there are handprints of celebrities – the wife was chuffed to see Lionel Richie’s handprints next to those of Ronan Keating.

A trip to the top of the Olympic Tower, at 291m the tallest structure in Munich, is a must. From here, you can see the snow-capped Alps in the distance and the spiders web-covered Olympic Stadium below you. This was home to European giants Bayern Munich and city rivals TSV Munich 1860 until they moved to the Allianz Arena in 2005 – this is also visible from the Olympic Tower on a road called Werner Heisenberg Allee (who knew Breaking Bad’s Walter White was a Bundesliga fan?)

Being married to someone obsessed with all things feline, it was a given that we would pay a visit to Katzentempel (www.cafe-katzentempel.de; Türkenstrasse 29), one of the few cat cafés in Europe. Massive in Japan and Asia, where people tend not to own cats, the idea behind cat cafés is that you can play with the resident cats while having a drink. 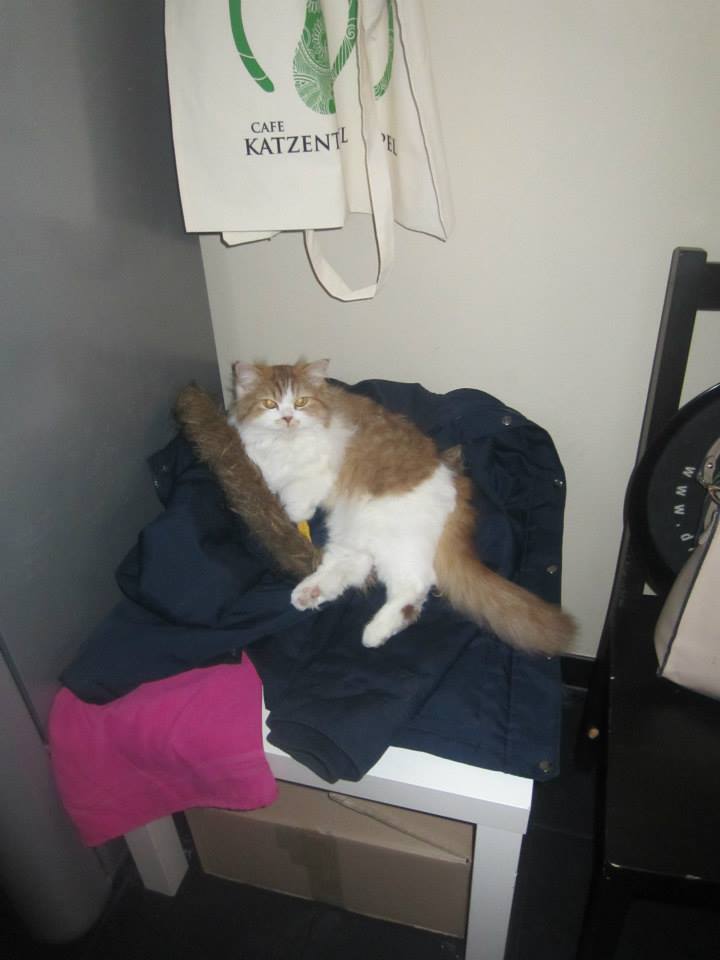 The pedigree cats at Katzentempel were a pretty antisocial bunch on our visit, preferring to sleep in baskets scattered around the café although one of them, a three-legged ginger, wanted a bit of fuss when we’d paid up. Don’t be put off by the German-only menu and the vegan fayre on offer – the breakfasts and homemade cakes were pretty good. There are plenty of tables here so there’s no need to reserve a slot (like you need to at the cat café in London).