Dublin in a day

Flights to Dublin are obscenely cheap, and as it takes under an hour to get there from UK cities, Ireland’s capital is handmade for daytrips. Fancy getting the first flight of the day there and the last flight home? Here’s how to do it.

Upon arrival at Dublin airport, buy your ticket for the Airlink Express bus from the travel information desk in the arrivals hall to get to the city centre. Buses leave every 15-20 minutes, and returns cost €10. To be in the heart of the action, get off at the stop for College Green & Temple Bar. The ride takes 30 minutes.

Cake lovers will be in heaven at Queen of Tarts (4 Cork Hill), a short walk from the bus stop opposite Dublin Castle. There are so many tarts, sponges, cheesecakes and scones on display in this tiny café, you’ll need a few minutes to look at the offerings before making your mind up. I devoured the warm chocolate, apple and pear tart with a pot of Barry’s Irish Tea and declared myself fit and ready for a day of sightseeing.

The River Liffey divides the city in two, and we took a bracing walk along it from Temple Bar to the Docks, crossing the river at the many bridges. Walking along the north bank, a boardwalk takes you to the famous Ha’penny Bridge, so-called because it cost Dubliners half a penny to cross it in days gone by.

You will be able to see a rather grand green-domed building in the distance, which is where we headed for next. The Custom House was where ships entering Dublin had to declare their goods and pay customs. Just past it on the boardwalk is a memorial to those who died in Ireland’s Great Famine, which led to a million Irish emigrating. It shows painfully thin locals (and a scrawny dog) heading towards the docks to catch a boat to America. 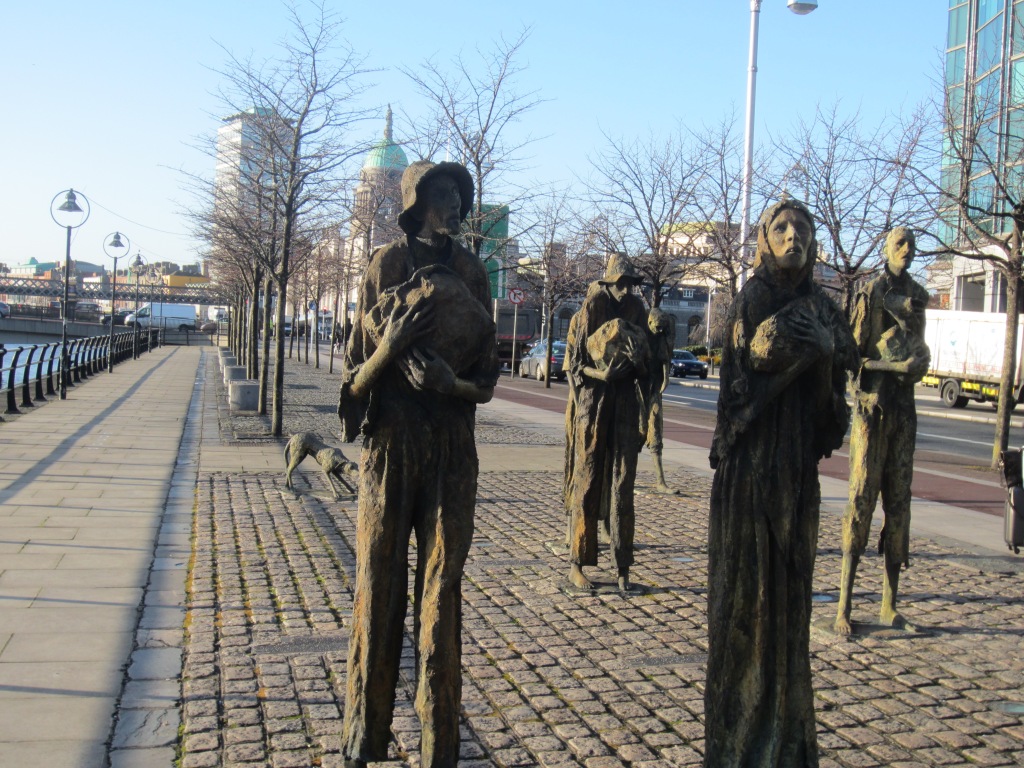 Architect Santiago Calatrava designed the bridge we crossed back towards the centre, the Samuel Beckett Bridge, which opened in 2009 and is so new it doesn’t appear on many maps. Looking like an Irish Harp from a distance, it will probably be an iconic symbol of the city in a few years’ time.

If you fancy some stand-up comedy with your sightseeing, you can do far worse than the hop on-hop off bus tour. We sat on the top deck and listened as our driver, Harry, took us all over town cracking jokes and giving us some history of Dublin.

We passed the city’s two cathedrals, Christ Church and St. Patrick’s, on the way to Ireland’s premier tourist attraction, the Guinness Storehouse. As I’d been before and Kat hates the stuff, we stayed on the bus as it went through Phoenix Park. We regretted not alighting here and will return one day to see the herd of deer, Dublin Zoo and the President’s residence.

As Harry took us along the north bank of the Liffey past the Jameson’s Whiskey Distillery and up and down O’Connell Street, we realised there is enough to keep you busy here for two or three days. 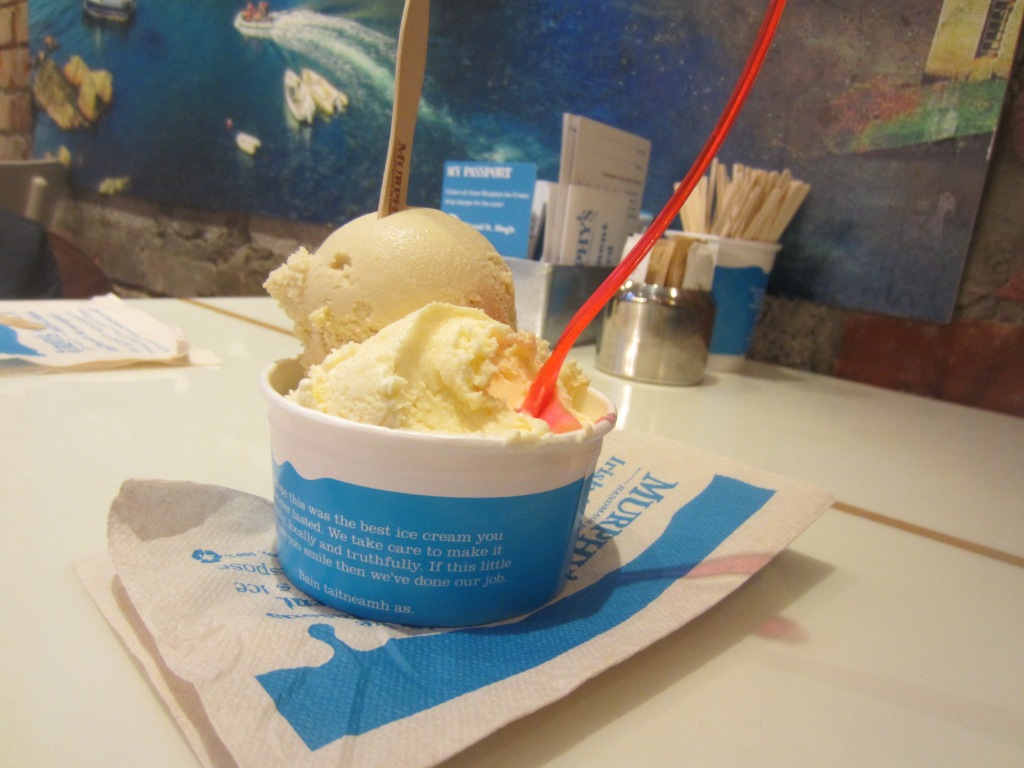 Who knew Ireland had a quality ice-cream tradition? A bit peckish by now, we stumbled upon Murphy’s (27 Wicklow Street) and although it was freezing cold outside, we popped in to try probably the best ice-cream we’d ever had. Made with the creamy milk from rare Kerry cows, I fell in love with the Dingle Sea Salt flavour – it sounds nasty but the saltiness and creaminess complement each other perfectly. Next time we visit Dublin, this will be the first place we go to – Kat’s pencilled in a date with the lemon curd flavour, but more of the same will do for me. 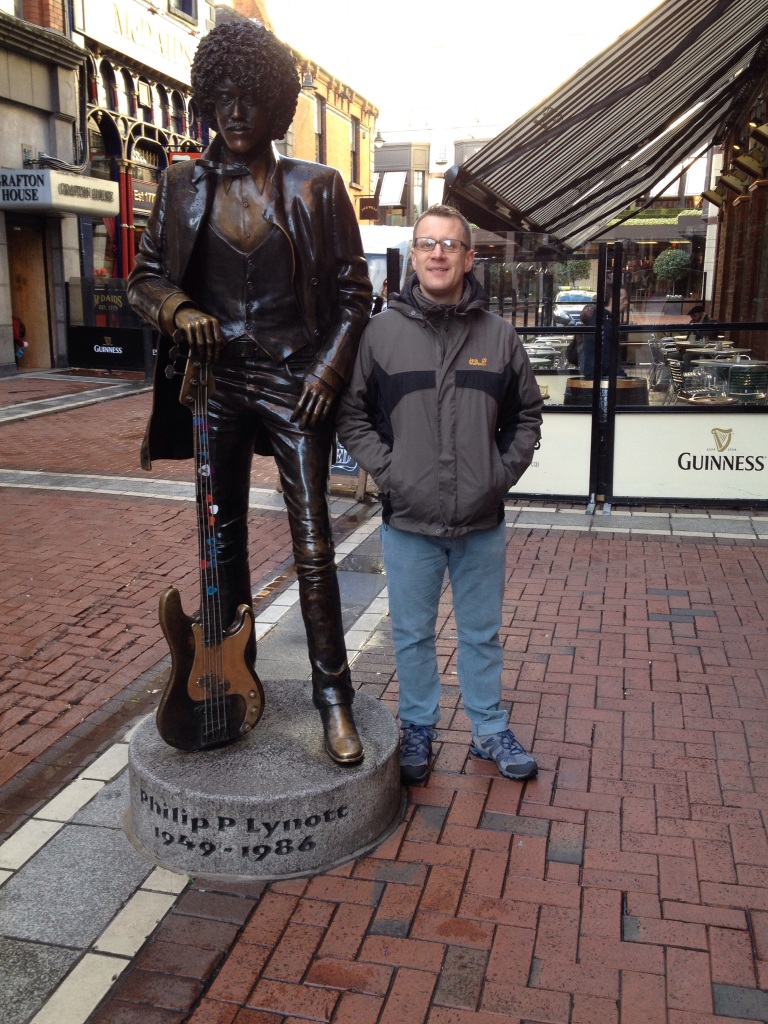 Grafton Street is Dublin’s main shopping area, with high street names and a reputation for street musicians. Mexican guitar duo Rodrigo y Gabriela started their career busking here, but frustrated at not finding anyone of their quality I headed off in search of one of my heroes, Phil Lynott. The frontman from Thin Lizzy, he’s immortalised in a statue on Harry Street, but it’s easy to miss as there’s a market stall blocking its view. I think he looks quite scary in a comical way, but that doesn’t stop rock-lovers putting plectrums in his guitar strings in his honour.

There are more statues in Dublin than in any other city I can recall seeing, and Molly Malone’s (a.k.a the tart with the cart) is outside the Tourist Information office on Suffolk Street. There’s an Irish Pub called Molly Malone’s everywhere I go, so I was glad I could finally see this famous fishmonger by day/prostitute by night in the flesh, so to speak.

Dublin’s not all about pubs and Guinness – we warmed ourselves up in the cosy wine bar Olesya’s (18 Exchequer Street) which boasts 400 different wines, 100 by the glass and it doesn’t even sell the black stuff.

Tummies rumbling, it was time to hit a burger joint we’d noticed earlier – Bobo’s (50 Dame Street), specialising in gourmet burgers using Irish beef. With some great names like Sex on the Farm, the food here is filling although the décor and experience is only one step up from fast-food really. Burgers are around €10 but come without chips, so it’s not cheap.

With two hours to go until we had to head back to the airport, it was time for some serious Guinness drinking at last. Temple Bar is the name of an area, a street and a pub and is the place to go for a full-on touristy experience. They say the Guinness tastes nicer in Dublin than anywhere else, and at our first stop Oliver St. John Gogarty (57 Fleet Street) I’d have to agree, a lot smoother and creamier than the watery rubbish served back home.

Next stop was the massive Porterhouse (16 Parliament Street), which brews its own beers so rather than Guinness I had their Plain Porter. We had time for one final drink at the famous Temple Bar (48 Temple Bar) – probably the most touristy pub in Ireland, and surely its most expensive (€16 for a Guinness and a G&T).

As we supped up to the strains of the traditional Irish band and planned our dash to the bus-stop, we agreed that our whirlwind tour of Dublin was a roaring success, and we talked about coming back soon and staying for more than ten hours next time.

Our returns from Birmingham to Dublin cost £16 each. Keep an eye on skyscanner and you might get an even cheaper deal.

Like Loading...
Categories: UK and IrelandTags: A day in Dublin, Dublin, Ireland, Things to do in Dublin