The best hot chocolate in Cornwall

Sip a mug of the best hot chocolate you will find in Cornwall, and get a history lesson about the county’s wartime aviation history at the same time.

If I told you the best hot chocolate by far in Cornwall, if not England, can be found inside an ugly gated complex in a grim inland village without a beach in sight, would I be selling it?

Possibly not, but it’s true – just look at that top photo. The Kernow Chocolate Company opens its factory doors to the public for chocolate tasting, production viewing and more importantly hot-chocolate drinking at the on-site café.

The factory is based in the village of St Eval in north Cornwall. Unfortunately, it’s pronounced to rhyme with ‘Devil’ rather than ‘Evil’. It’s an odd little place, with a concrete housing estate that wouldn’t look out of place in Chernobyl and an immense Norman church – far too big for a village with a population of under 1,000 – spookily standing in the middle of nowhere. There is a reason for this, which I’ll explain later, but first it’s time for some chocolate.

Upon entering (entry is free, as is parking), we headed straight for the tasting table. Each day, four different flavours of broken-up chocolate bars are available to try. We tucked in, and particularly liked the white chocolate Eton Mess. You could really abuse the system here, and I’m proud to say that’s what I did, although I wouldn’t fancy my chances in the school summer holidays. 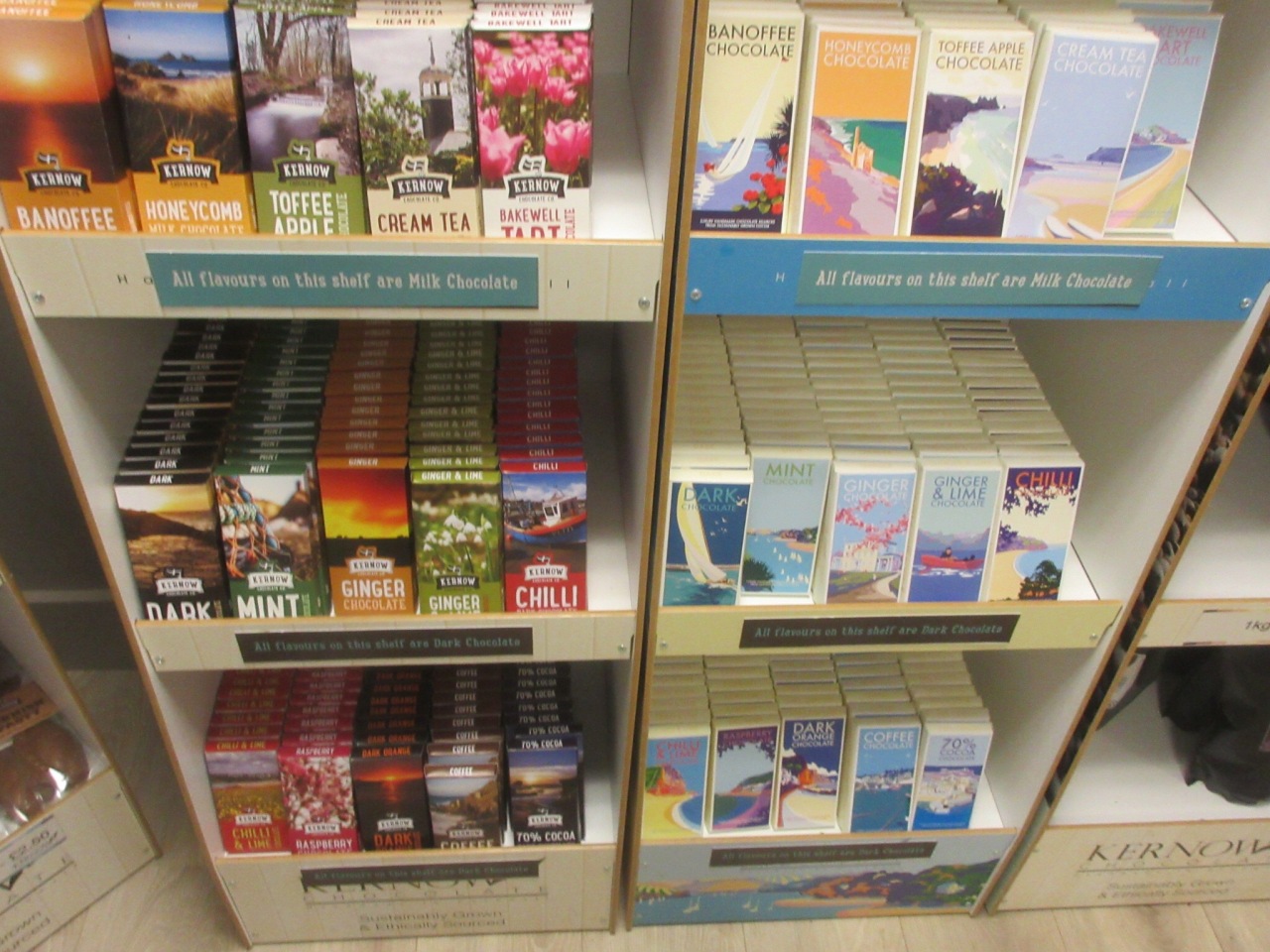 The Kernow Chocolate Company sells bars all over the country, and targets independent shops and delis – you might have seen their pretty Cornish beach branded bars.

The factory shop sells bars at decent prices, so we stocked up on chocs to take away before heading to the chocolate factory viewing window. You can look but you can’t touch – very frustrating!

The highlight is a visit to the on-site cafe for a cake and some hot chocolate. You get a mug of steaming hot milk, and a shot glass of molten chocolate to pour in. I chose salted caramel flavour chocolate, and drizzled the whole lot into my milk. It was absolute heaven. 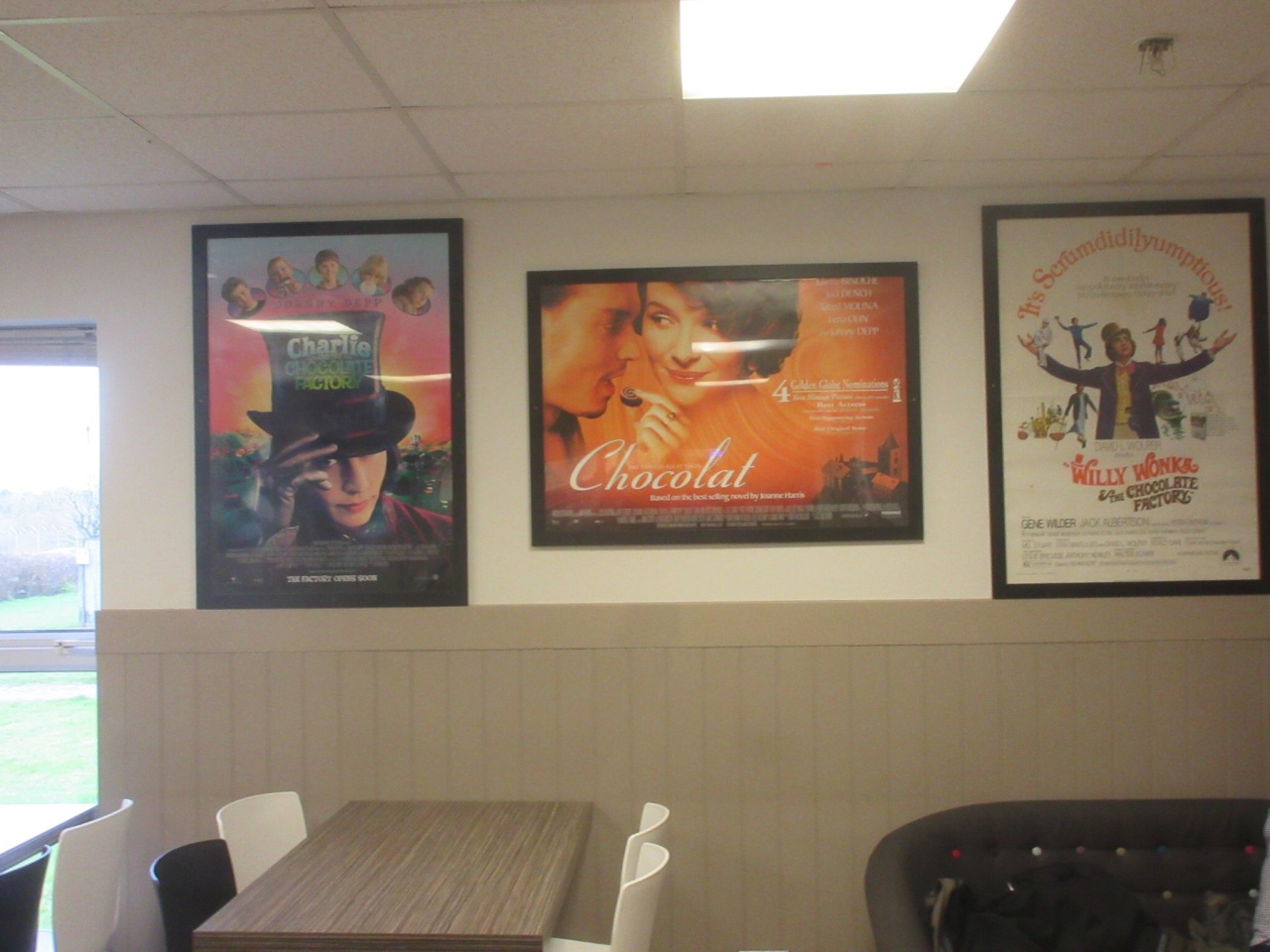 There are also, bizarrely, pictures of old planes.  In 1938, the RAF chose St Eval as the site for anti shipping and submarine patrols in the south west. Following compulsory purchase orders, most of the village was flattened to make way for an airfield and military buildings, although the church survived – this was used as a lookout point.

Spitfires, Hurricanes and Lancasters were stationed at RAF St Eval during WWII, although it closed in 1959 when operations moved to nearby RAF St Mawgan (now the site of Cornwall’s Newquay Airport).

The US Navy was stationed at RAF St Mawgan throughout the 1990s and 2000s, and many personnel and their families lived in St Eval at that time. The Americans actually built the gated complex that Kernow Chocolate Company now calls home.

In the cafe, there are photos of RAF St Eval in the 1940s compared to the present day, so you can swot up on aviation history while you experience one of the world’s best hot chocolates.