Up Dubai Creek without a paddle 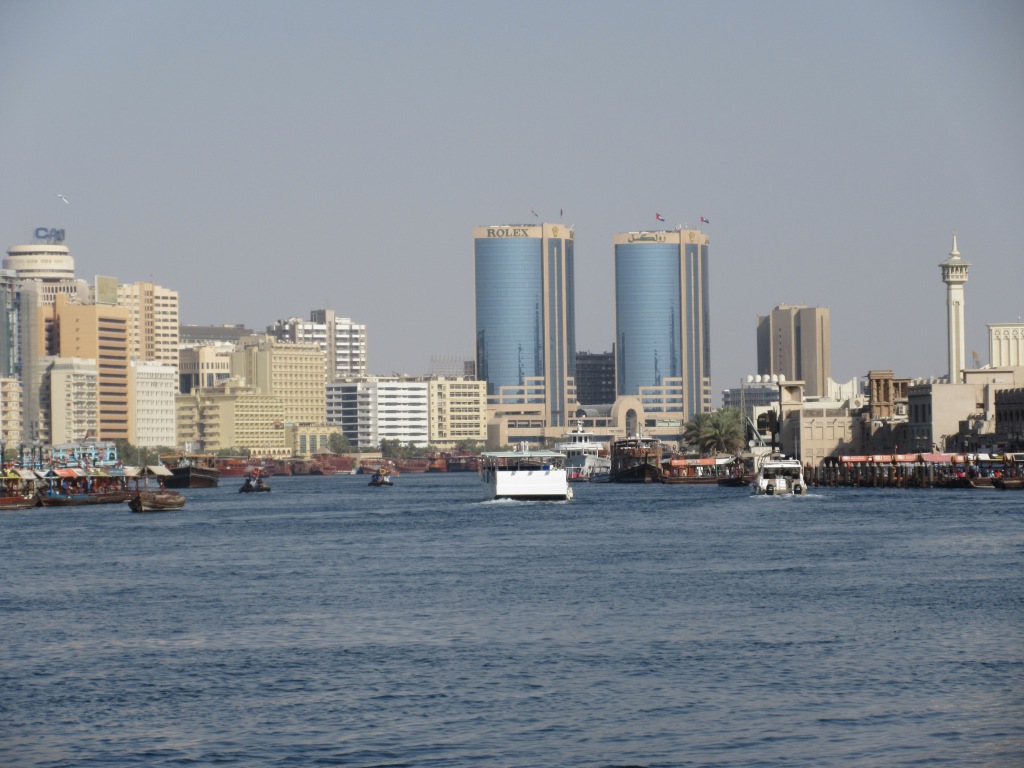 Dubai is not all skyscrapers, shopping malls and five star hotels. Dubai Creek allowed the city to develop in the first place, acting as the base for fishing and pearling industries and is the reason it became an important trading port. A visit to this area is a must if you’re in town, by day or by night.

When I was researching hotels for my trip to Dubai, I quickly became overwhelmed by the different areas of the city, many miles from each other. While the Marina, the Palm, Jumeirah and Downtown looked to be the more touristy choices with big attractions to please holidaymakers, the areas either side of Dubai Creek – Deira to the east and Bur Dubai to the west – looked pretty interesting too. Maybe not the kind of areas to stay in, but definitely worth a look. As it happened, we were having too much fun amongst the skyscrapers of modern Dubai, but we did manage two trips to the Creek – one in the day and one at night. 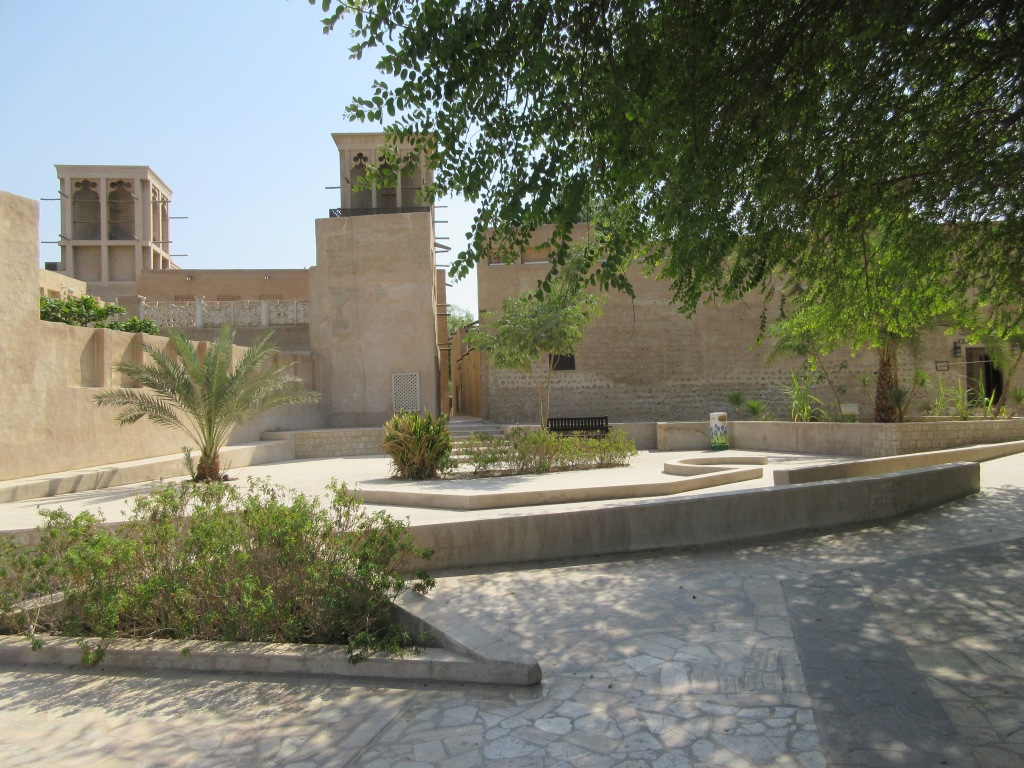 This quiet, pedestrianized and restored jumble of lanes shows off how Dubai might have looked before the discovery of oil. You will see several windtowers – a primitive form of air-conditioning that allow breezes to funnel down from chimneys into rooms below. Even public phone boxes have been made to resemble windtowers. 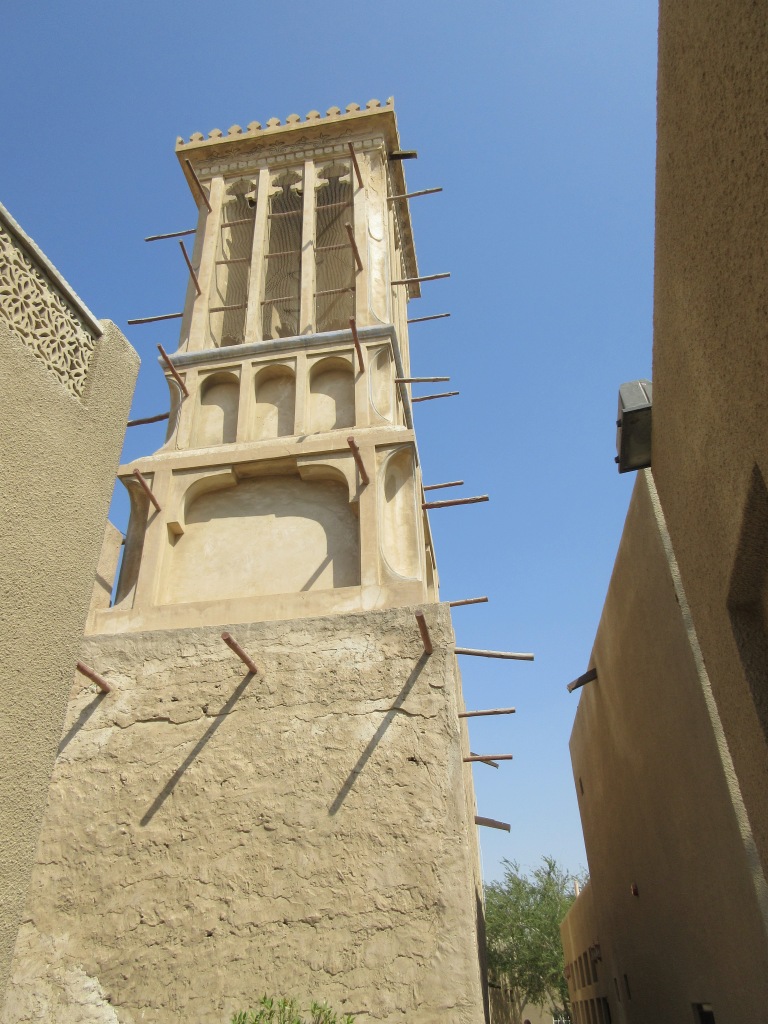 The area also features traditional Arabian houses with courtyards, many of which have been converted into cafés and museums. We popped into XVA – a café, art-gallery and boutique hotel rolled into one, for some food and drink. The minted lemonade was a revelation in the heat as it gives an energy boost, but my shawarma wrap was less so. A massive shawarma fan, I’d been looking forward to trying it all holiday, but the one here was vegetarian – I wish they’d have said so in the menu. 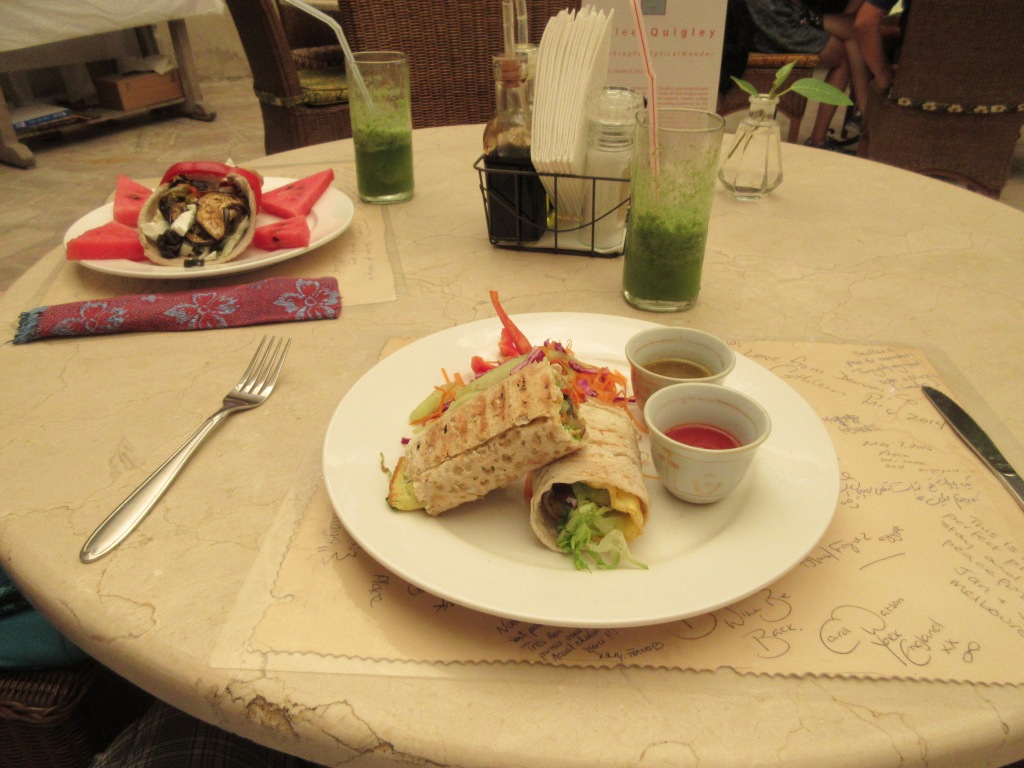 The creekside area is full of traditional souks, so off we went for a browse. After regularly paying 50 dirhams (about £9) for a beer, I wasn’t in the market to buy anything from the Gold Souk, and the Spice Souk would probably not have been my cup of tea (even if we could have found it). Instead we wandered through the covered Bur Dubai Souk and were shouted at and pestered by pushy traders trying to flog pashminas and fake Real Madrid shirts.

Happy to escape, we sat by the waterside soaking up the atmosphere and watched wooden “abra” boats crossing to Deira. I noticed a commotion to our right – a restaurant owner whose property backed on to the Creek had found a rat in his kitchen, and picked it up by the tail before slinging it into the water. The poor thing swam back to shore, climbed up the bank and tried to get back inside, so he booted it as hard as he could back into the water. This went on for several minutes, but when the restaurateur started throwing bricks at the rat we decided to move on. If I were you, I’d avoid “Blue Barjeel” like the plague!

There is a 90-minute boat cruise which leaves from Al-Ghubaiba water station and heads down the coast to the Marina, twenty miles away. This would have been a great way to see Dubai’s sights from an air-conditioned boat, but we’d missed that day’s departure so decided to catch the city’s driverless Metro to the Marina instead. 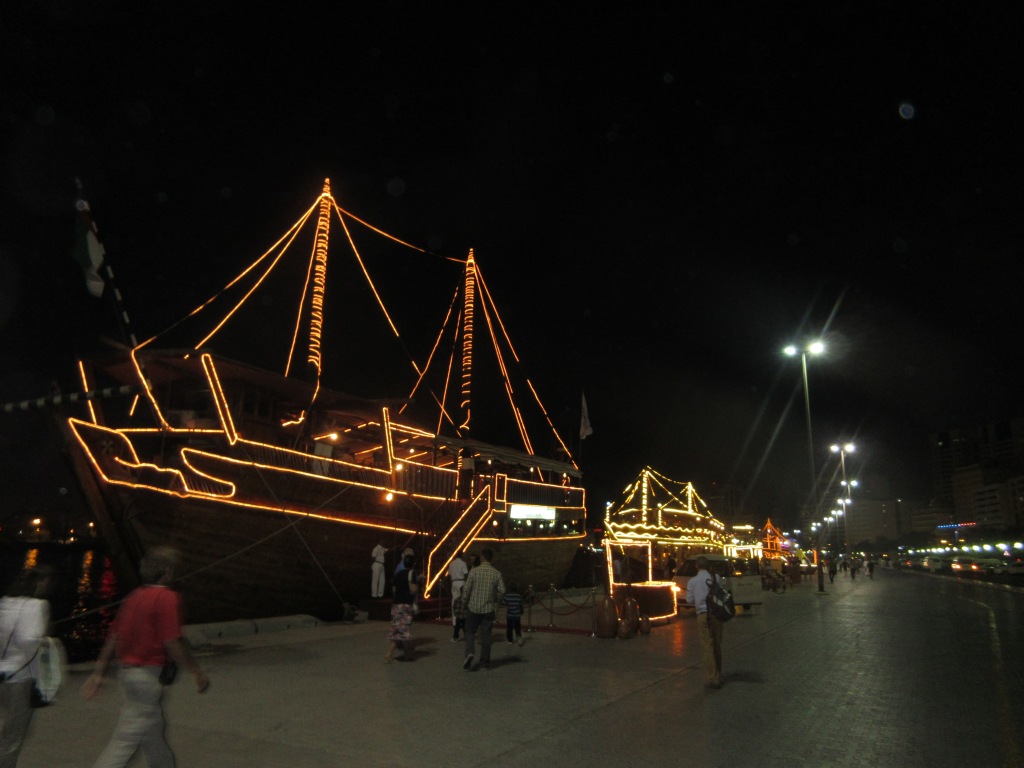 A few days later, we booked a dinner cruise on a traditional wooden dhow heading up the Creek to the point where it meets the Gulf. The Al Mansour Dhow is organised by the Radisson Blu hotel, and boarding is on the Dhow Wharfage in Deira opposite the hotel. I’d heard a few less than complimentary things about Deira. One guidebook said it was a cross between Cairo and Karachi, another said if you stay there you should check your hotel isn’t actually a brothel, while someone I spoke to who was staying there while on vacation from Jeddah said the area was worse than Saudi Arabia.

Deira didn’t look too bad to us from the water, a mixture of big hotels and ethnic restaurants. We had the best table in the house on board our restaurant and were cooled by the breeze from the Creek before we went to the lower deck to help ourselves to the unlimited buffet. Much has been made of Dubai’s expense, but the food and drink here is not bad value at 185 dirhams each (about £33) including all soft drinks, or an additional 99 dirhams each (about £18) for unlimited alcohol. 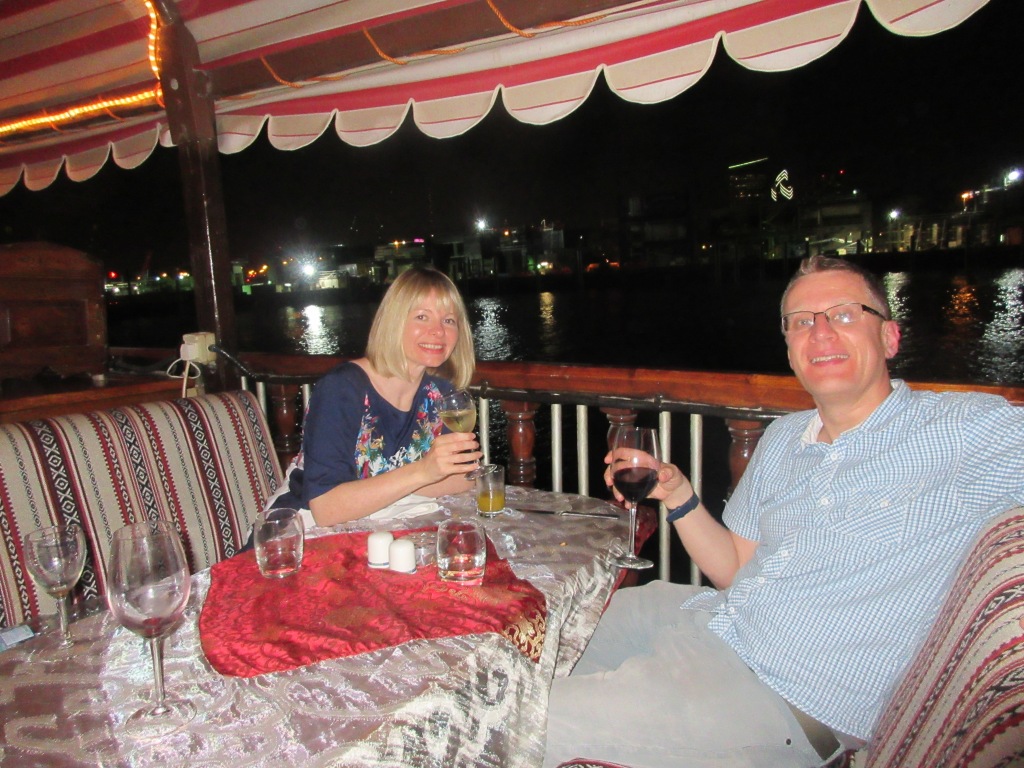 As we approached the mouth of the Creek, we noticed an area of Bur Dubai we missed during the day – the bustling Heritage Village on the Bur Dubai side, with its outdoor seating and street-food stalls. If I’m lucky enough to return to Dubai one day, I’d like to see a bit more of Bur Dubai.

I’ll also be able to extend my cruise next time, as construction has begun on a massive project to extend the Creek by looping it back into the Gulf at Jumeirah Beach, creating canalside shopping and leisure facilities. We saw some of the construction, using the exploited labourers from South Asia that Dubai is notorious for.

Next time I’m in Dubai, I’ll be sure to take a bit more spending money, a map of the Creek development and some rat poison.